Yavia is a monotypic genus of dwarf plants. This is one of the most recently discovered genera in the Cactus family. Despite a recent description of this genera, Yavia is being rapidly propagated by enthusiasts. This should make it more and more available each year.

Yavia is named after Argentina’s department Yavi, Jujuy Province, where the plant is endemic to sparsely vegetated rocky slopes. The only species in this genus is Yavia cryptocarpa. This name refers to the plant being a cryptocarp. Fruits of this cactus are forming inside the plant’s body, thus being only visible when the plant shrinks in the drought period. Yavia is a very mimetic cactus that takes the color of the surrounding rocks.

Yavia cryptocarpa is a small globular cactus that grows in a single stem, but it may clump if you graft it. It has ribs, but you can hardly notice them beyond the rows of fuzzy-white areoles that feature very small reddish-brown spines. Flowers are pink with a short, thick floral tube.

Yavia cryptocarpa loves to be in a bright exposure, but you should avoid planting it in the direct light or sun. You will risk giving your cactus sunburns, especially during the hottest hours of the day and during the summer. These cactus need well-drained soil. Yavia is very susceptible to rot, so you should use cacti pot mixes.

When it comes to water, Yavia has the same needs as most other cacti. You should water it during the growing period and let the soil dry completely before watering it again. As soon as temperatures start dropping, you should start drying out the soil and keep it that way during winter, at the temperatures from 40 to 60°F (5 to 15°C). 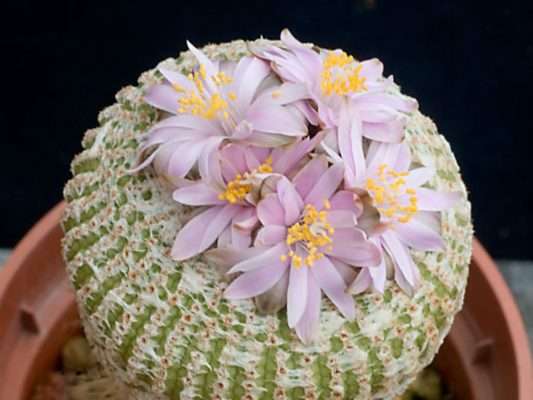 You will need to keep this cactus in a cool place during the winter. Yavia can tolerate sporadic frost if you keep on the dry side prior to, and during, cold weather. This way you’ll hardly kill this cactus. However, you shouldn’t expose it to temperatures lower than 40°F (5°C), even if you plant it somewhere with good airflow and protection.

Yavia doesn’t need much fertilizer, because of slow growth. However, if you want to fertilize it, you should do it just a couple of time per year, during spring and summer.