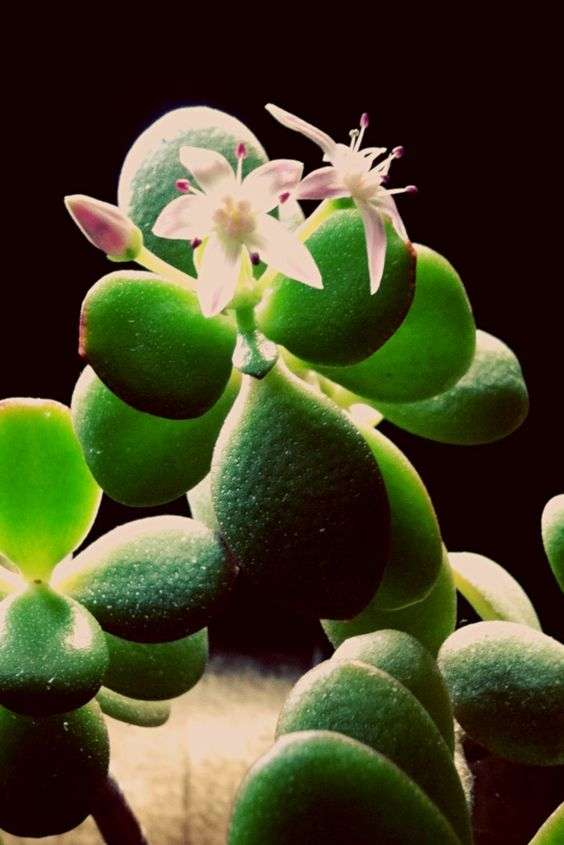 With an impressive variety of succulent plants, collectors are drawn to their easy-care nature, low maintenance and year-round foliage interest. This popular genus offers an extensive array of sizes, growing forms and textures making them the perfect houseplant for both beginners and hardened enthusiasts.

Today I want to take a look at some of the more unusual species within the Crassula family, focused towards the more discerning plant collector.  With such a huge genus to work with, I have had my work cut out. Thankfully, I have compiled a list of quality species to bring vibrant colors, fascinating growth structures and individual character to your home.

Firstly, let’s take a look at their native beginnings.

Origin of the Crassulaceae family

This is one of the largest families of succulent plants, whose species have adapted to live in a wide range of environments from the damp, cold of northern Europe to the more tropical habitats of Southern Africa.  The most common genera include Crassula, Echeveria, Sedum, Sempervirum, Tylecodon, Kalanchoe, Adromischus and Dudleya.

Many species are winter flowering, with some more suited to garden-growing.  Others however, need the protection of a heated glasshouse or conservatory.  All it seems are particularly popular among growers and collectors throughout the world.

As interest in the Crassula genus has grown, the number of cultivars and hybrids available to the enthusiast has, in turn, expanded.  Crassulaceae plant collections contain some of the most fascinating growth forms of all succulents.  These easily adapt to a home growing environment, whilst remaining fairly compact in size.

In Latin, Crassula means “thick”, giving reference to their fleshy succulent leaves.  These are an important characteristic that enables them to survive landscapes with high temperatures and minimal rainfall.

This stunning cultivar of the “C. umbella”, is small in nature with un-branched, upright stems. Its circular, bright green leaves are arranged in pairs on the stems. Each leaf has a raised edge and is fused around the stem, creating an unusual and attractively cupped circular leaf structure, hence the cultivar name of “Wine Cup”.

From winter to spring time, small yellow-green flowers appear on a slender 10 cm long inflorescence, each flower opening to 1 cm in diameter.  When flowering, this species has an overall height of 6 inches, 15 cm. 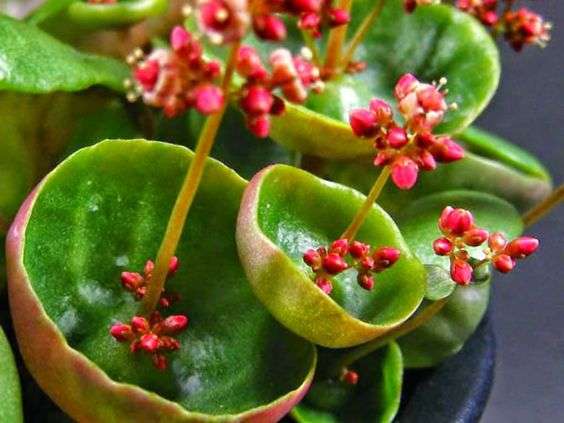 Overall, this unusual variety of Crassula umbella has a unique appeal to the succulent enthusiast.   Few species compete with its delicate shape and form.

The “perforata” grows long rambling, un-branched stems, in a fast and sprawling habit, thus resulting in a shrubby-looking succulent plant.  Also known as the “String of Buttons”, its fleshy stems look much like they have been stacked on top of each other, initially growing erect but in time becoming pendant and spreading outwards.  The short, glaucous, triangular shaped leaves grow in pairs, spirally arranged on the stems, often taking on a pink hue in the sunshine around the edges.  Tiny cream flowers appear somewhen between November and April on a tall and slender inflorescence.  In the wild, this “perforata” variety is commonly found growing among thicket vegetation and rocky outcrops. 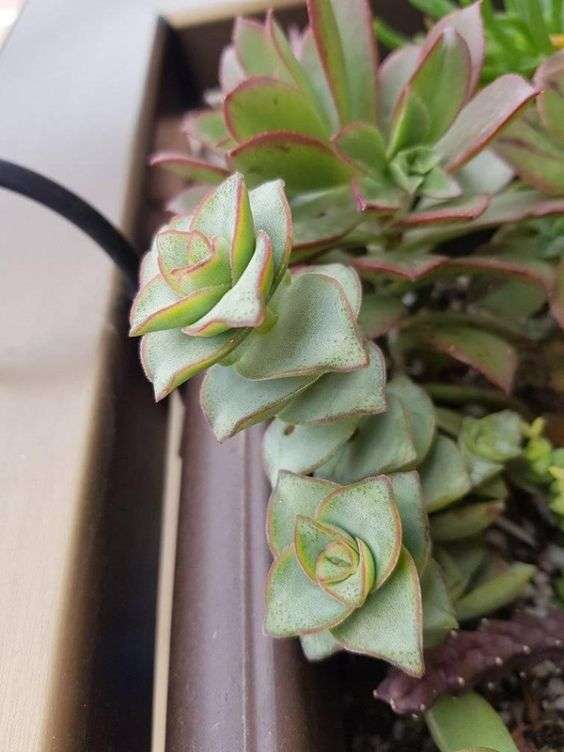 A delicate looking specimen plant growing to a maximum of 2 feet high, 60 cm, with a decent spread of up to 3 feet, 90 cm.  As with all Crassula’s, these thrive in a well-drained, slightly sandy soil and are drought tolerant.

Here we have a stemless dwarf perennial succulent with layers of textured triangular leaves arranged spirally on top of each other.  This results in dense tufts of mat-like foliage.  With a woody root stock, red-spotted, dark green, toothed leaves and a hairy flowering stem, the “picturata” is easily distinguished from your average Crassula. 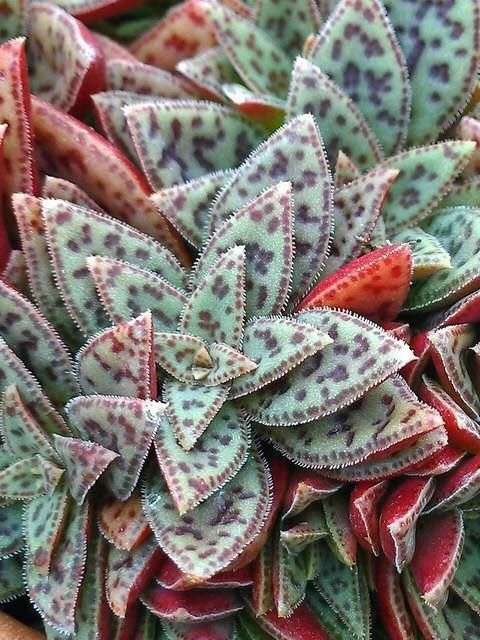 The typically small white or pink flowers appear in late summer, continuing through to late autumn on a textured, hairy flowering stem.  Interesting leaf markings and delicate toothed margins make this Crassula species invaluable to the collector in search of something a little different.

Also known as the “Rattlesnake Tail” crassula, here we have a dwarf succulent shrub with erect, columnar stems branched from the plant base.  Each stem is covered by smooth and fleshy, ovate overlapping leaves, all forming a short and cylindrical column, much like that of a tree-cone.  Young branches have an almost spherical appearance of glaucous, grey-green rosebuds.  Leaves are concave in shape, each tiny and measuring only 0.2 inches, 5 mm. 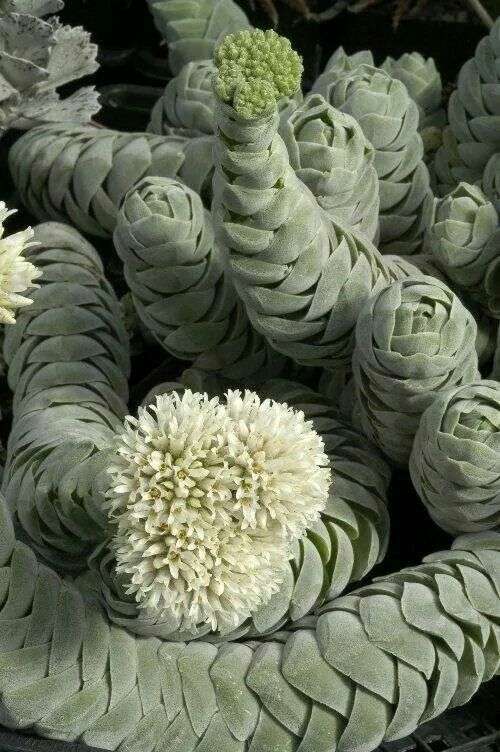 Flower heads of the “barcklyi” appear in winter time, topping each stem.  They are almost spherical in shape, each made up of hundreds of tiny white star-shaped flowers.  Beautiful.

The “capitella” is a hugely variable species of Crassula with narrowly pointed, green propeller-like leaves all stacked on top of each other, reducing in size towards the tips.  The top few rosette leaves change to the form of floral bracts where in summer, long, pointed 6-inch, 15.2 cm, inflorescences appear with white star-shaped flowers growing around each thick, erect stem. 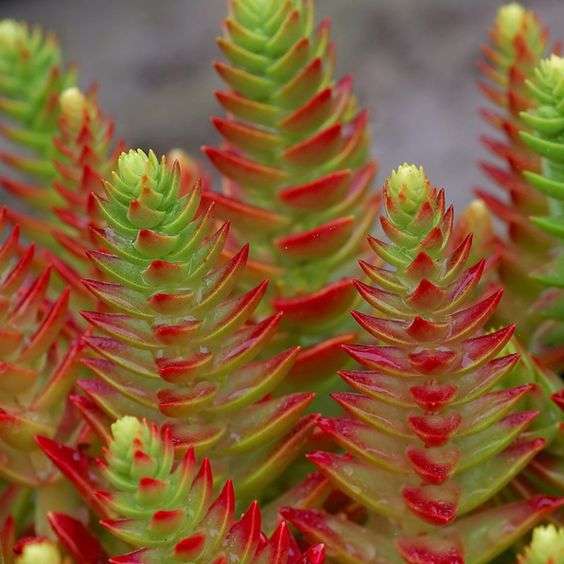 In infancy, the leaves are green, maturing to a vivid red in the sunlight, hence its common name of “Red Pagoda”.  This is mostly a biennial bloomer with rambling stems and a somewhat spreading habit, easily taking root at internodes which lie against the ground.  In maturity, expect a height of 40 cm, 15.7 inches with a similar sized outward spread.

A beautifully colored species of Crassula with oriental-themed foliage.

This small and clustering succulent has a shrubby appearance and dwarf form, reaching just 6 inches, 15 cm tall.  Its stems grow erect, with a decumbent form and branching habit.  Small and thin triangular to ovate leaves have a familiar stacked appearance, increasing in size towards the plant base.  These being green to brown in infancy, but changing to a deep red hue in the sunlight. 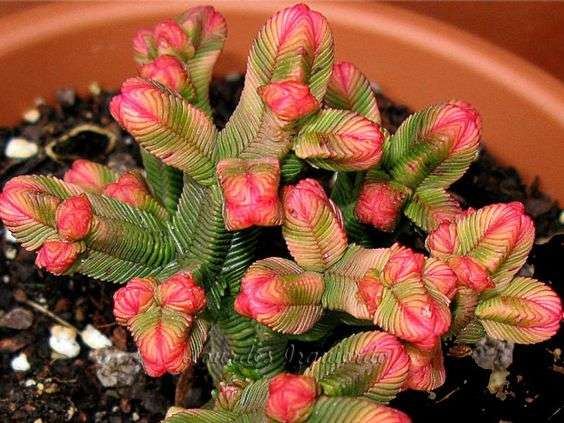 This is a miniature form of the “Red Pagoda” above, whose flowers are small, creamy white to pink and appear in a dense terminal cluster in the Summer.

All in all, the “pyramidalis” is a striking miniature succulent with multi-colored foliage throughout the year.

The “Woolly Crassula” is a slow-growing succulent which forms a perennial or biennial clump of glaucous foliage and reaches a height of 2 feet, that’s 60 cm tall.  Its grey-green leaves are quite variable in shape, often growing as compact rosettes, all textured with tiny hairs on the entire leaves and their margins.  White and yellow flowers appear on a robust 2 ft, 60 cm, flower stem from early to mid-summer. 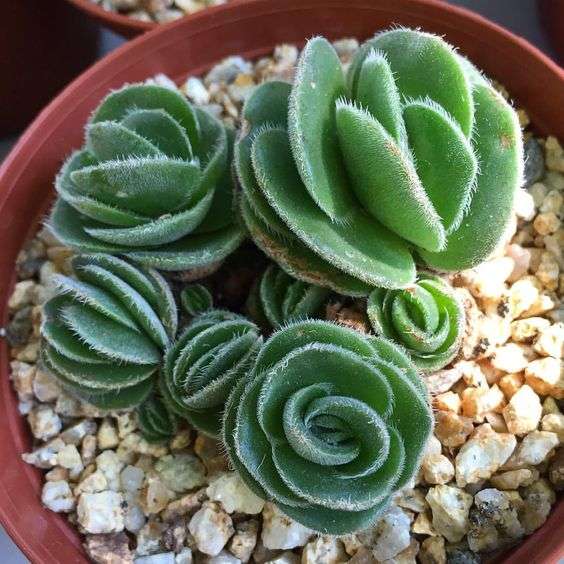 With a common name of “Fairy Crassula”, and a height that rarely exceeds 1 foot, 30 cm, the “multicava” is considered a dwarf succulent plant.  Its glossy round and thin leaves are arranged opposite each other on fleshy stems, their upper surfaces patterned with hydathodes, which are water absorbing/secreting pores.  This adaptation allows the leaves to absorb water from dews and fog, given reference in its Latin translation as “many holes”.  These leaves form wide, dense mats of dark green ground cover in the shade, lightening up in the sunshine to a brighter green.  Flowers are produced in the winter time, consisting of red, thinly branched inflorescence sprays of tiny star-shaped white flowers which contrast perfectly against the green mat foliage. 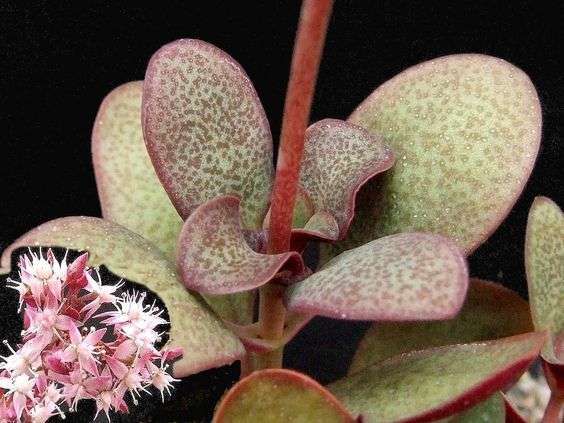 The Crassula multicava is a petit, delicate succulent variety with a lovely sprawling form and showy flower display.

A variant on the well-known “Jade Plant”, with the same bushy form and glossy, round, fleshy leaves.  However, the leaf margins of this succulent variety are edged with yellow and red, which when sited in bright sunshine, can take up most of the leaf.  This is probably one of my favorite variegated succulents, its foliage a rich summer gold and topped with delicate inflorescences of tiny white star-shaped flowers.  Its growth form is similar to the standard Jade Plant, with a height and spread of around 3 feet, 1 meter, with its trunk and limbs becoming thick, grey and sturdy as the plant matures. 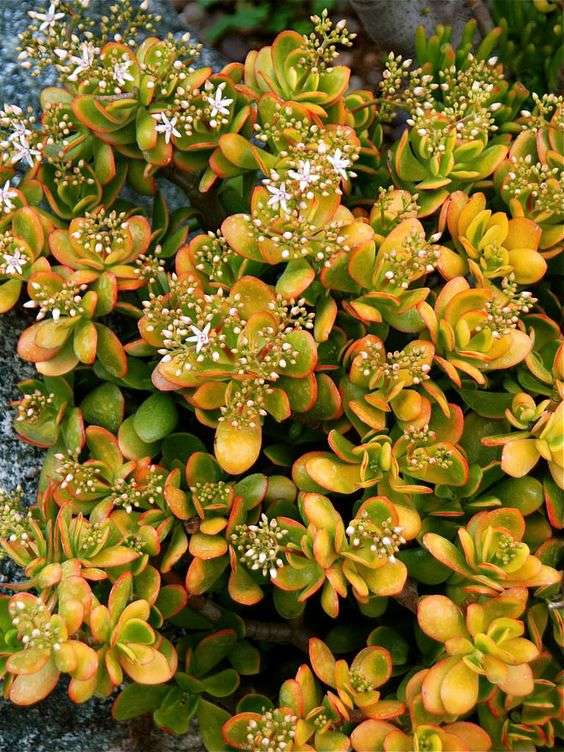 The “Gollum” is one of those strange-looking, tubular-leaved succulents which seems to be available pretty much anywhere nowadays, even in the supermarkets.  Its growth habit is upright and branching, taking on the appearance of a miniature tree.  The fleshy, novel-looking leaves are trumpet-shaped with indented leaf tips, almost like small cones.  Each of the leaves are bright, glossy green in color, with a deep red edging at the tips. Otherwise known as a Monstruosa cultivar, the stems thicken with age and in maturity will reach around 80 cm, just less than a meter tall. 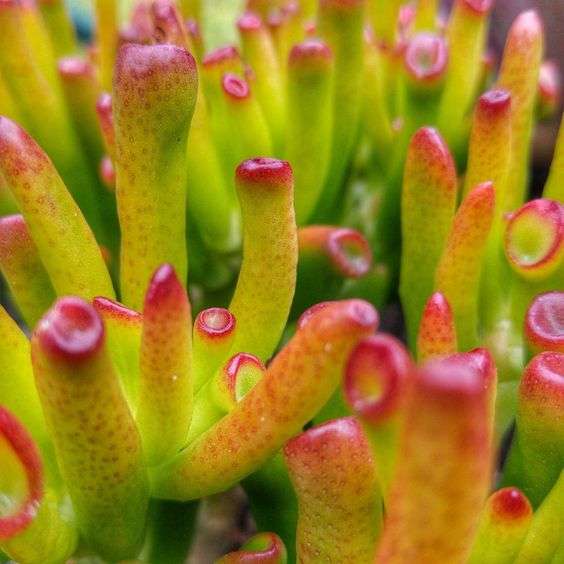 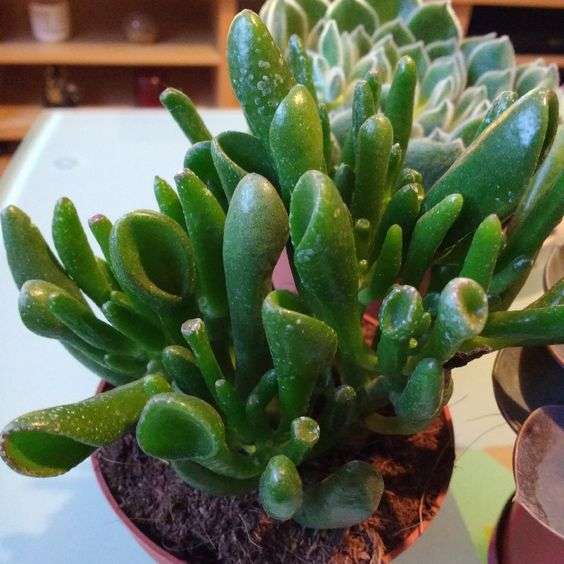 Overall, the “Gollum” has an interesting form with delicate coloring.  Like most Crassula, this species will perform best in bright and airy conditions, in sunshine or part shade.

This particular variety is a hybrid between Crassula perfoliate x Crassula pyramidalis and created back in 1959.  The results are striking and unusual. Its grey-green, square, thickened, scale-like leaves are densely stacked, forming a square-shaped column up to around 6 inches tall, 15.25 cm.  Its resemblance to a Chinese Temple, lends its name to this eye-catching hybrid. 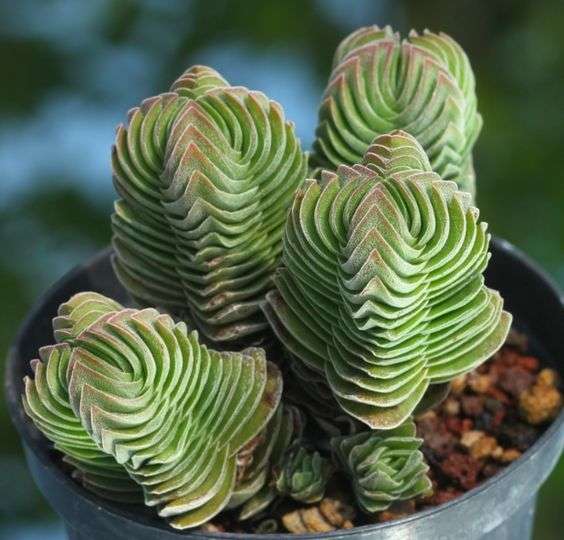 Each leaf is upward-facing, with gently curled tips and their surfaces have a silvery-white dusting which comes off when touched.  In time, the main column will start producing side branches, which grow at differing levels.  Mature plants bear red flower buds at the apex of each stem in the summer months, opening to a perfect sphere of tiny pink or white star-shaped flowers. 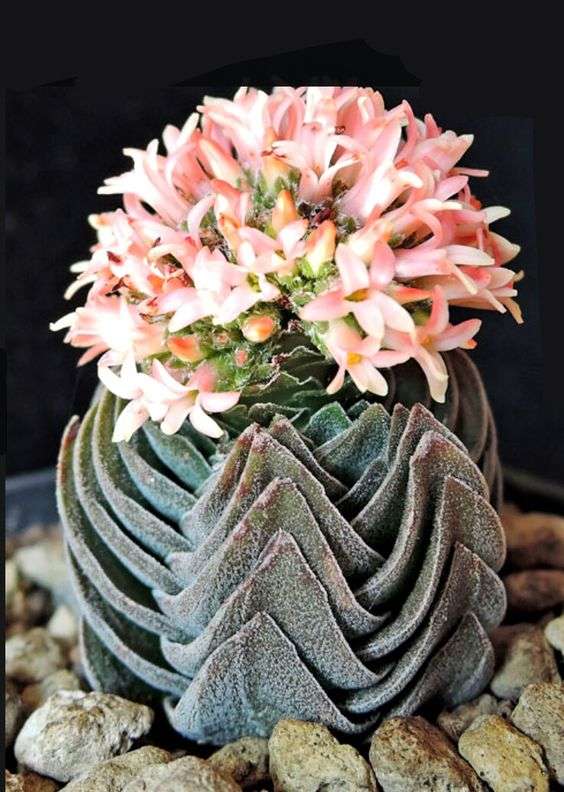 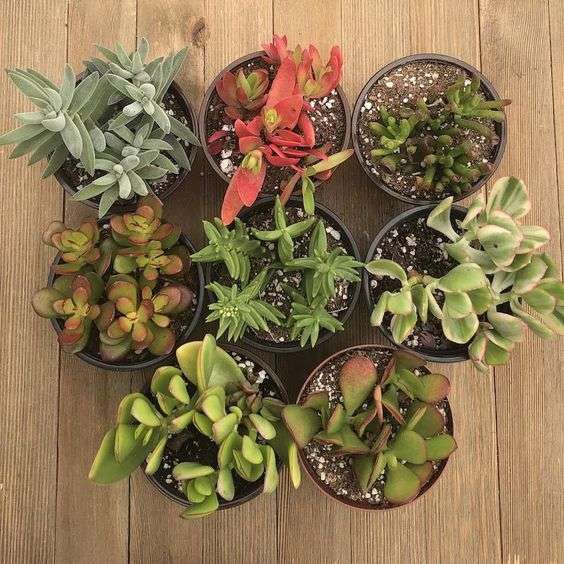 There are many more fascinating species of Crassula than those I have listed above as my personal favorites.  Providing they are planted in a well-draining, sandy soil mix, the genus require little attention and minimal maintenance.  When given a good amount of indirect sunlight, their fleshy leaves take on a gold and red hue.  These remain darker however, when kept in the shade.

Crassula are succulent plants and well-accomplished in reserving water, so care should be taken to keep these plants quite dry.