Hi friends, here I am with the second part of the saguaro cactus article, in which I’m going to introduce you to an amazing phenomenon in the saguaro’s life known as cresting which gives rise to something beautiful called crested saguaro or cristate saguaro! Cristate saguaro is so beautiful that if you’ve grown saguaro of your own and if you see a cristate saguaro, you may wish your saguaro crests.

Cresting is a mutation in which the cells in the growing stems of saguaro divide and start growing outward rather than their usual circular growing pattern. Because of this unusual mutation, a large fan-like crest is formed at the growing tips of saguaro and such a saguaro is known as crested or cristate saguaro.

Although cresting is not specific to saguaro and most species of cacti undergo this phenomenon, it’s the most noticeable and beautiful in saguaro. 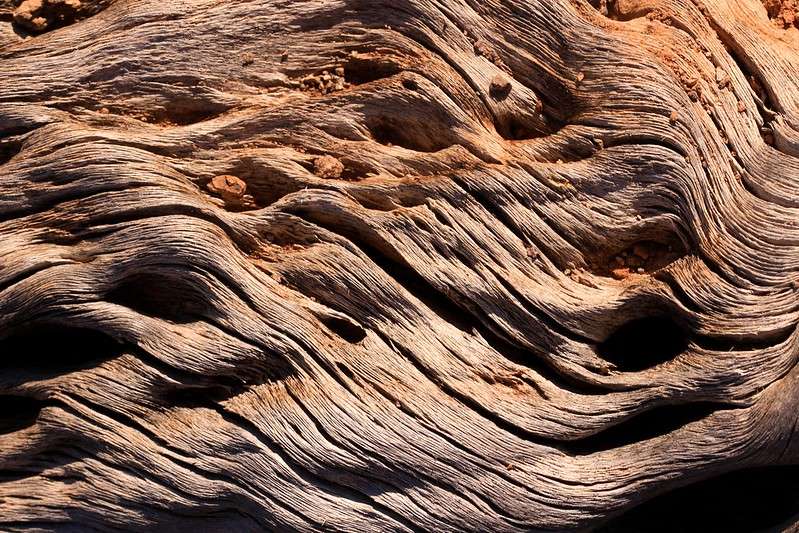 The cause of cresting is still unknown. But many theories have been put forward to explain this rare occurrence.

The most common theories are freezing and lightening. According to saguaro experts, there might be some triggers which may start the process and one of the most heavily implicated one is frost, as crested saguaro occurs more commonly in the northernmost parts of their native area. However, there is no enough evidence for this theory.

According to a saguaro expert, Bill Peachey, the cause of cresting in saguaro is a hormone that makes the number of pleats on a saguaro grow uncontrollably. This is because many saguaros get back to normal growth after years of cresting, according to Bill. 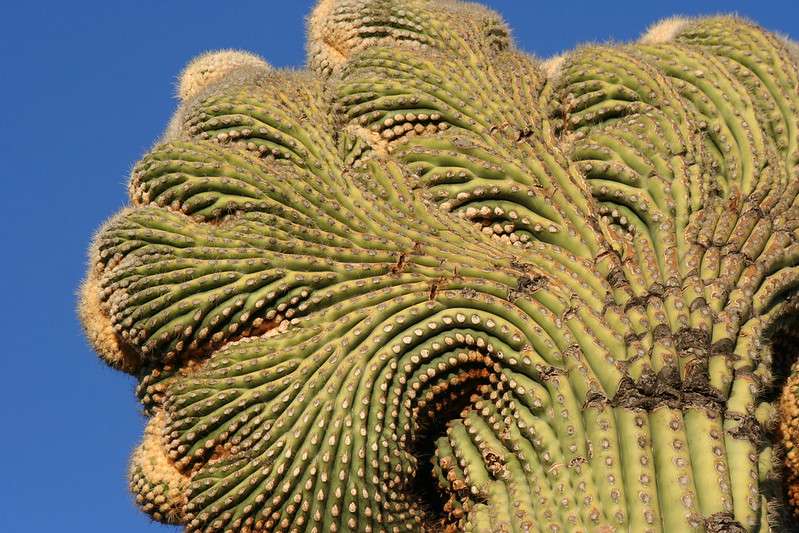 How does Cristate Saguaro Look?

Saguaro is usually shaped like a fan or semi-circle, and measures around 3 to 5 feet in diameter. They even exhibit folds and convoluted patterns creating other interesting designs, and some people find their resemblance to broccoli. 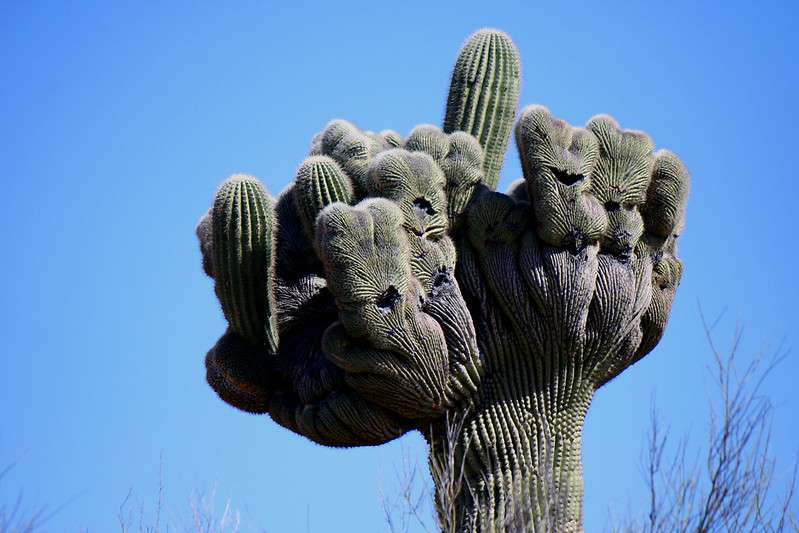 How does Cristate Saguaro Behave?

Cristate saguaro perform all the normal life processes like flowering in the spring, form viable seeds in the summer and also sprout and develop a new arm or two right from the crest. Similar to all saguaro cacti, no two cristate saguaros look alike. 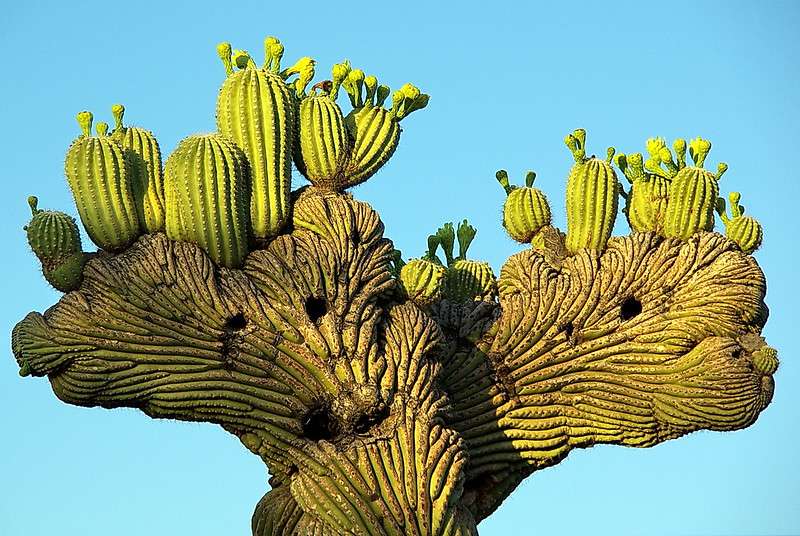 Cristate saguaro was considered to be rare. However, the members of the Crested Saguaro Society founded by Bob Cardell, a military veteran and saguaro-lover, have found more than 2,000 saguaros and have proved that they are not very rare.

As such, saguaro grows in a part of the Sonoran Desert that spans from Western Sonora Mexico to Southern Arizona. In the 11 years of tracking, the Crested Saguaro Society’s members have found 2,214 crested saguaros across Arizona. 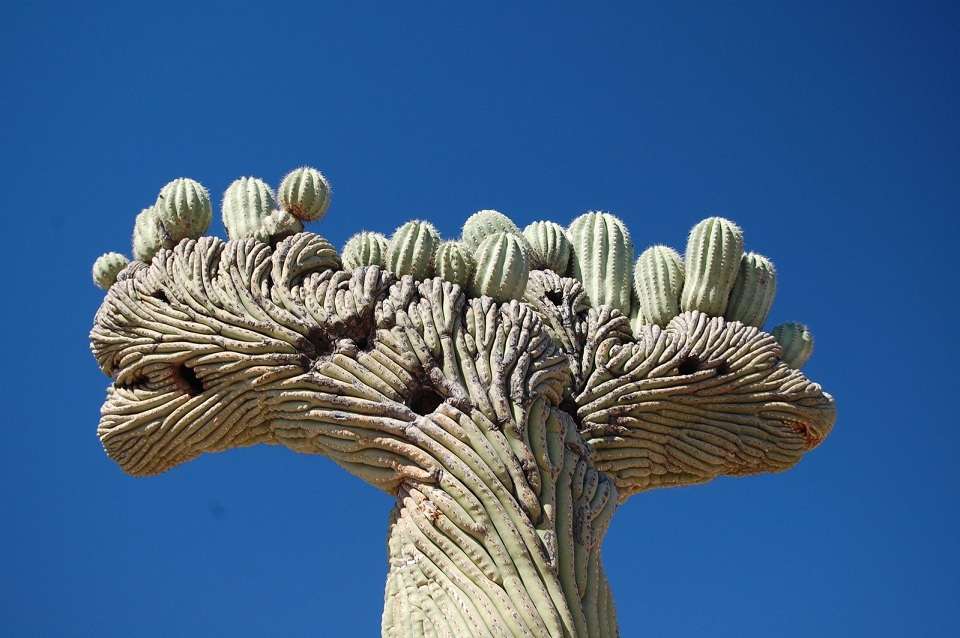 Although many crested saguaros have been found, there are many dangers which can decrease their number.

Firstly, these cacti are more vulnerable to damage caused by frost and strong wind than normal saguaro. Other danger is poachers who target them due to their uniqueness and value. Therefore the Arizona Department of Agriculture has given these unique natural wonders the highest level of protection. Public awareness has also been increased causing a remarkable reduction in the problem.

Isn’t cristate saguaro beautiful and interesting? I’m sure any cactus-lover will wish to have one in their garden. If you plant a saguaro and it starts cresting, you’ll certainly feel proud.