Whenever someone plans to create a succulent garden, they definitely consider planting Aloe vera. Not only Aloe vera looks beautiful but also it has health and beauty benefits, due to which Aloe vera is so popular. But do you know that Aloe comes in almost 500 different types which contain edible as well as poisonous varieties? So, in addition to Aloe vera, you can plant many other attractive varieties of this succulent. Here are ten varieties of Aloe you should consider including in your succulent garden.

Aloe arborescens is not just edible, but it’s also an officially approved medicinal plant. The juice of its leaves is effective for healing burns. It grows to a height of up to 2-3 meters. Leaves are green with a slight blue tinge. They are arranged in rosettes and have small spikes along their edges. Flowers are very attractive and are of striking red-orange color. 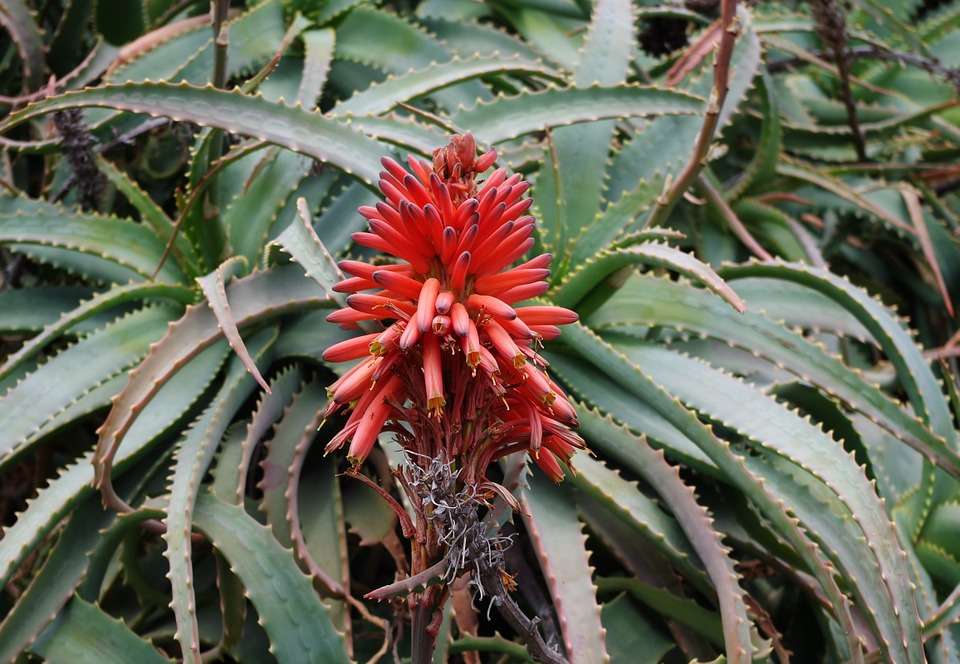 Also known as bitter aloe or Cape aloe, Aloe ferox is native to South Africa, and is used in making a bitter aloe, a laxative medication, and also a non-bitter gel that is used in cosmetics. This single-stemmed aloe can grow to a height of even up to 10 feet. Leaves are thick, fleshy, arranged in the characteristic rosette pattern of the Aloe genus. They are pale green with a slight reddish tint with spines along their edges and tips when they become taller and less vulnerable to grazing (when they are young and on a short height, they’ve spines on their surfaces too). Flowers are red or orange. They are 2 to 4 feet above the leaves and have multi-branched inflorescence. 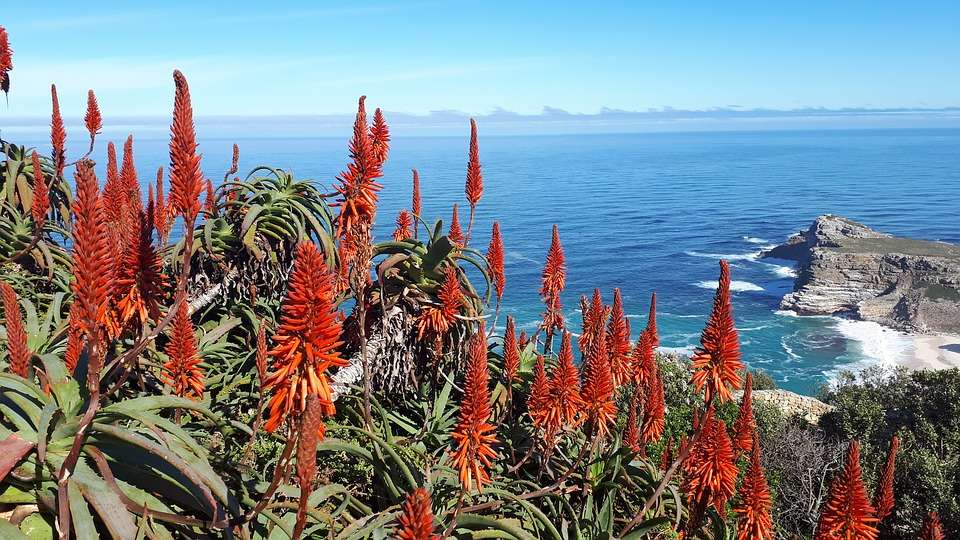 Aloe vera has become highly popular due to its medicinal and cosmetic properties. Particularly the sap inside the leaf is used for consumption and topical application. The sap is also used to manufacture foods like yogurt and cosmetics like skin creams and lotions. They are even used in items like cotton swabs and panty liners. Aloe vera has no to very short stem, and grows up to 60-100 cm tall. It spreads by offsets. Leaves have serrated margins and are thick, fleshy and pale green to gray green in color. The plant blooms in summer. Flowers emerge on 90-cm tall spikes and are tubular and yellow-colored. 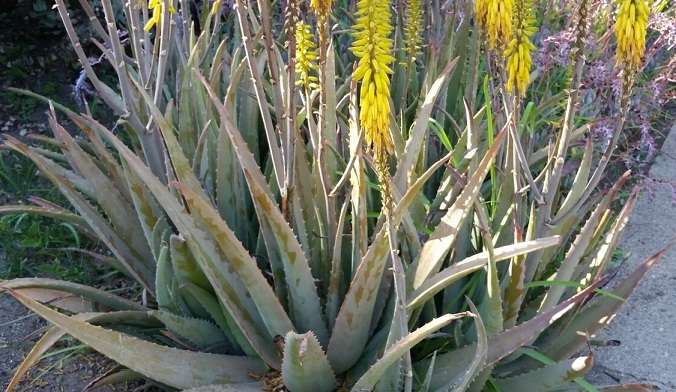 Also known as Arabian Aloe, Aloe Rubroviolacea is a beautiful evergreen aloe variety that forms rosettes of thick leaves. It’s a very attractive plant because its leaves are bluish green in partial shade but its spines are reddish. When kept in full sun the leaves turn purple and deepen to violet-red in winter. The leaves develop on thick stems. Head of the plant sprawls and offsets develop from the base and form a small clump. Thus it grows up to 2-3 ft. tall and 4-6 ft. wide. It blooms in winter. Flowers are in an attractive red color and form on top of unbranched stalks and are up to 30 inches in height. The plant is deer resistant and is great for borders, rock gardens, Mediterranean gardens, decorative containers and as an accent.

Also known as Snake Aloe or Mountain Aloe, Aloe broomii is a flowering aloe, native to southern Africa. It grows well elsewhere in gravel and rock gardens. Its leaves are light green and look beautiful, ideal to grow as an ornamental plant. Its flowers are yellow-colored and are very attractive to birds. The plant has medicinal properties too. Farmers use it as a pesticide to purge ticks from livestock, as an ear remedy for sheep and as a disinfectant. It’s a water-wise plant like most other Aloe plant species, and is ideal to plant while xeriscaping. 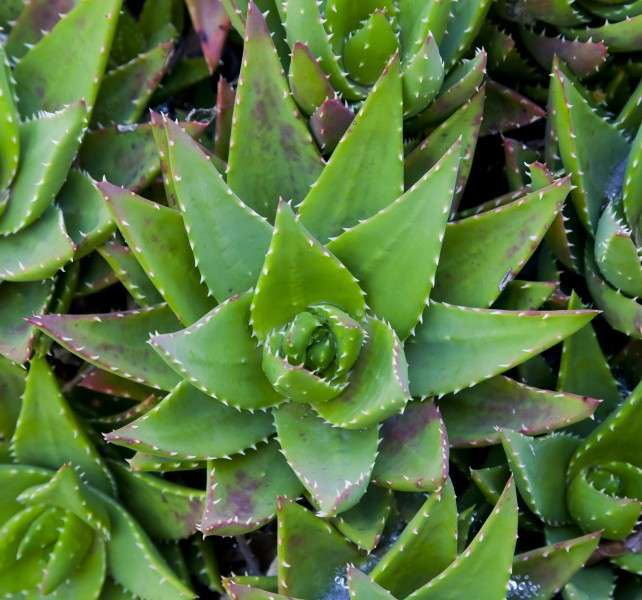 Commonly known as Stone Aloe, Aloe petricola is a flowering aloe having unique inflorescences which make the plant remarkable and discernible from other aloe plants. Because of its distinct radiant and beautiful colors, this plant is very popular as a garden plant. It also has medicinal properties for healing wounds and minor burns. Its leaves are attractive with their bluish green color. The plant grows from early to mid-winter but blooms in July. It’s extremely low-maintenance and grows even in stony grounds with only a little soil to cover its roots.

Also known as Cape Speckled Aloe, Aloe microstigma is one of the most floriferous aloes native to South Africa. An evergreen succulent, it forms small solitary clusters of lovely rosettes of blue-green leaves which turn reddish brown when stressed. Moreover, there are noticeable white spots on leaves that create a nice contrast with the reddish teeth on the borders. Spikes of flowers are around 3 feet tall. Flowers are red in bud stage and turn orange and yellowish orange when open. They enliven the dull winter landscapes as their towering bright colors look like flames. The flowers also contain nectar and so, attract bees and birds. This aloe is virtually disease-free and needs not much of water. 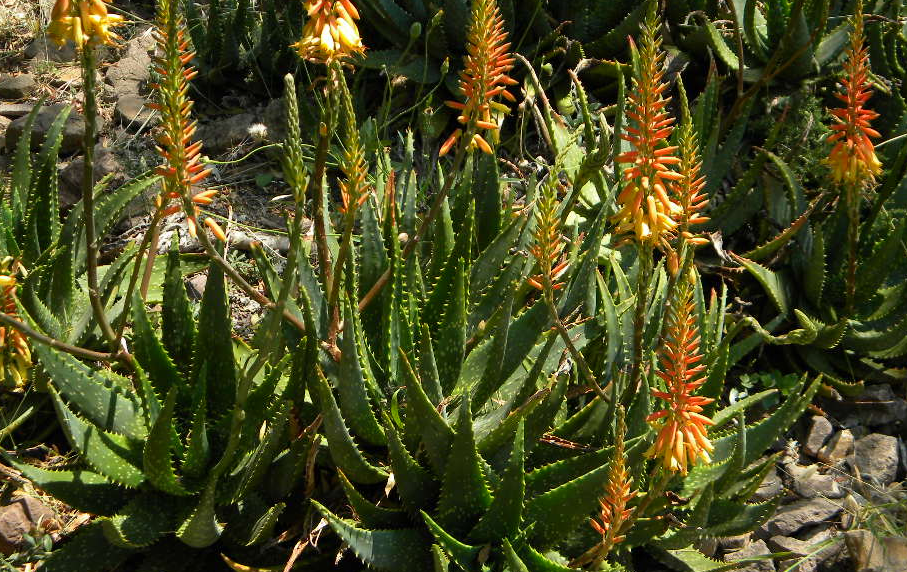 This is an evergreen succulent that develops in cute tiny rosettes with deep green leaves that have long spines on their margins and that turn red when stressed. Flowers are bright orange and attract birds. The plant is deer resistant and is a great addition to rock gardens and container gardens. It’s a prolific propagator, forming many offsets. Remember that Crosby’s Prolific cannot be propagated from leaves. If you try that you may find the leaves rotting. The plant is not cold hardy and hence should be planted in containers that can be brought indoors if you live in an area that gets colder than 30° F (-1.1° C). In the garden, it should be planted in a spot that gets 6 hours of sunlight every day. If planted indoors, it should be placed in a room that gets ample sunlight.

Native to Zimbabwe and Malawi, Aloe Cameronii is regarded as one of the most beautiful foliage aloes. It’s an evergreen succulent that form open rosettes on upright stems. The most attractive part is its fleshy, nicely curved leaves with a plethora of colors, ranging from green to intense red which form depending on the availability of sun and water. It blooms in late fall to early winter when bountiful spikes of rich orange-red flowers form above the foliage. The plant can be easily propagated from cuttings and offer a colorful focal point to your landscape. 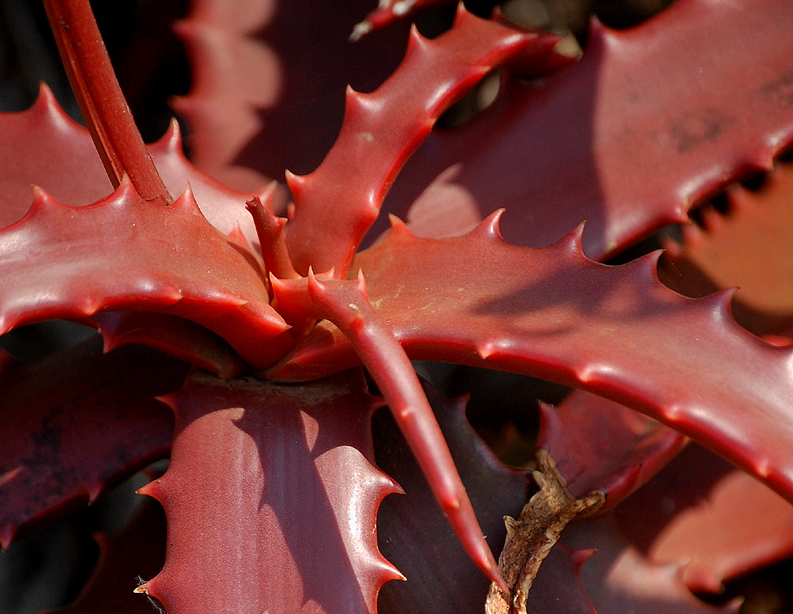 Also commonly known as Red Hot Poker Aloe, Sekope and Ngopanie, Aloe aculeata is native to South Africa, Mozambique and Zimbabwe. This plant has sharp spines and teeth, hence the name aculeata which means prickly. Its flowers are orange-yellow colored and are very attractive. They form from August to October. You can grow this plant in beds as well as containers, but you should protect it from winter rains.

All these aloe varieties are worth including in your succulent garden. Choose among them and make your garden look more beautiful than ever!